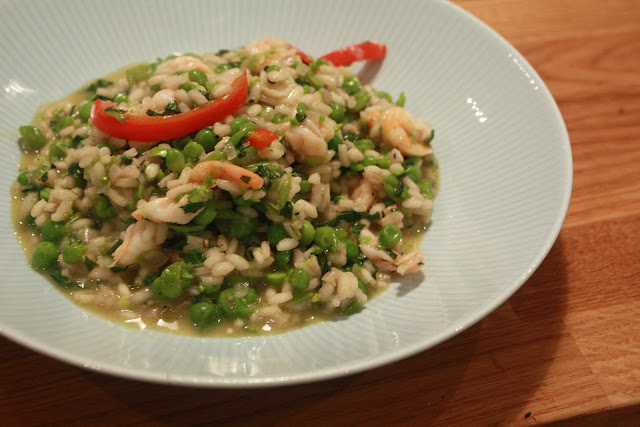 So this is the other half of my Mother’s Day post. Thought I’d spit it up and spread it over two posts because of how busy I am. This was what preceded the epic chocolate fondants which I blogged about earlier this week for the dinner my sister and I made for mum on mother's day. 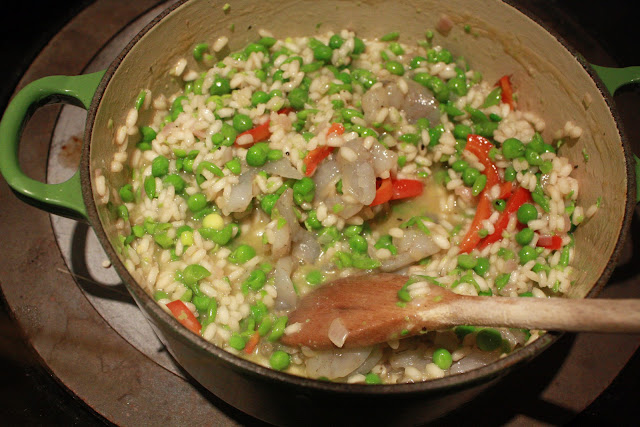 For those who don’t know this is the period of the year considered by most third year students to be dissertation hell, or revision hell depending on the way your degree swings.

My degree swings in a way, which makes the next month editing hell. One of my two (yes two) dissertations is making a film. Me and two of my peers have chosen to make a documentary on Female Mixed Martial Artists. To anyone else that is girl cage fighters. Exciting huh?

The downfall of this is having now collected all our footage we now are spending day after day in a windowless editing booth (while it is beautifully sunny in Brighton I may add) trying to string a coherent film together. I love it yes, but after staring at a screen for 8 hours in one sitting trying to work out if a clip needs another millisecond shaved off it to make the scene run more smoothly I tend to feel like I have cotton wool for a brain and don’t fancy cooking anything too elaborate later in the evening.

Annnnyway back to the risotto…My sister fought with me bitterly about the addition of basil to this recipe but I definitely stand by it and would even go as far as saying this may be the best risotto on this blog to date. Bold. I know.

To start with get your stock hot, and mash half the peas with a little bit of the butter. 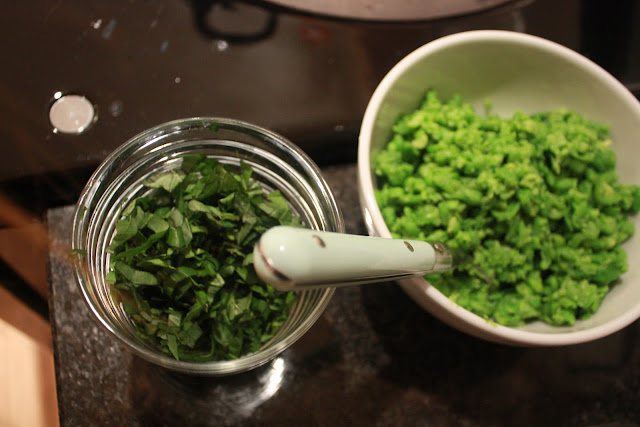 Sweat the onion in the olive oil and the rest of the butter, when soft add the garlic.

When fragrant turn up the heat and add the rice , fry until slightly translucent and add the wine. When the alcohol has burnt off add the peppers and start adding the stock ladle by ladle adding the next when the last has been completely absorbed, stirring frequently to massage the starch out of the rice.

When the rice is nearly cooked, throw in the prawns, whole peas and when the peas are cooked and the prawns have turned pink stir in the mashed peas herbs and a squeeze of lemon.

Season to taste and serve drizzled with olive oil. 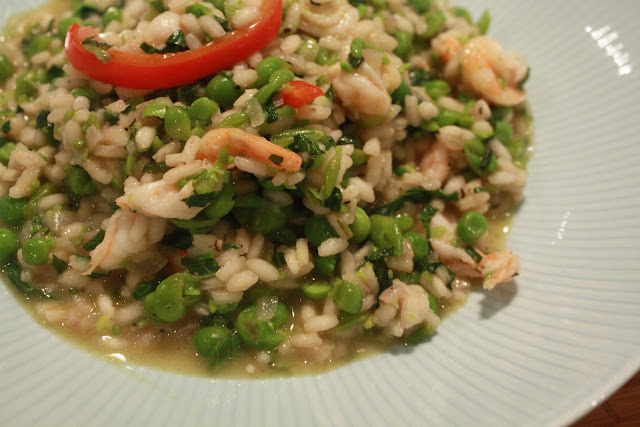 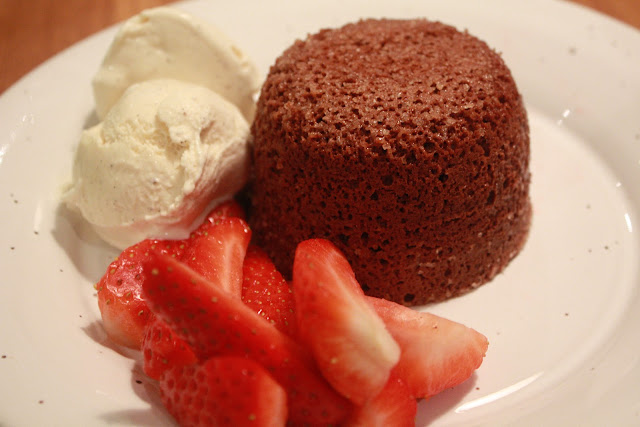 I’ll freely confess I am not much of a pudding person but give me a chocolate fondant and there is literally no stopping me.

The outside, with a crunch of sugar, then the soft sponge and the silky oozy middle, so intensely rich but still more-ish at the same time, served with some berries and cool cream, or even better ice-cream, so you get the hot/cold contrast and it all just melts together on your tongue ….. Ok. I’ll stop now. You get the idea. Chocolate fondants are MEGA yum.

I made these for mother’s day, my little sister suggested the menu, a prawn, pea and herb risotto (apparently one of mum’s favorites) followed by chocolate fondants with ice cream (again apparently one of mum’s favorites). I’m still suspicious that she just asked me to cook what she wanted to eat rather than it having anything to do with mother’s day, but mum loved it none the less.

Firstly, sort out your ramekins, brush their insides liberally with melted butter, stick them in the fridge and after that sets, brush them with another layer of melted butter and dust the inside with sugar, tapping out any extra, refrigerate.

Next melt the butter and sugar over a ban marie.

While that melts, whisk the sugar and eggs with an electric mixture until it reaches ribbon stage (basically until it thickens and holds its shape slightly) then sieve in the flour.

Fold in the chocolate mixture and pour into your moulds: 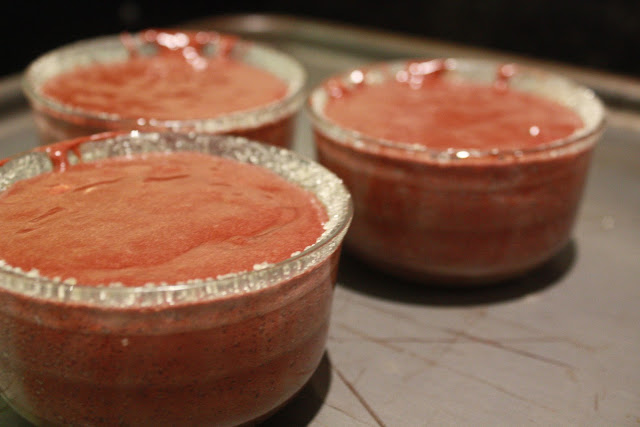 Bake for 8 - 10minutes until set enough to hold their shape but still runny in the middle.

Turn out onto plates and serve with ice cream and strawberries. 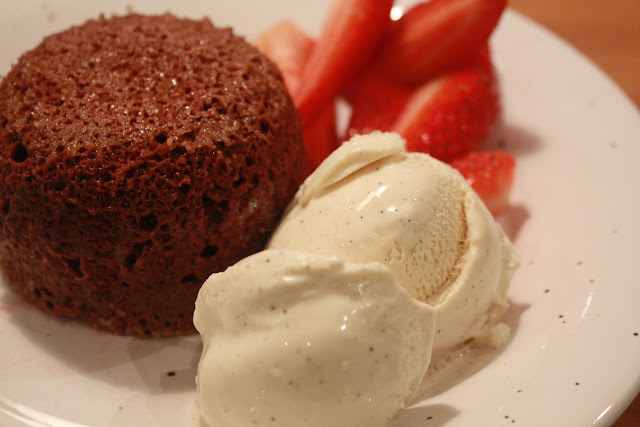 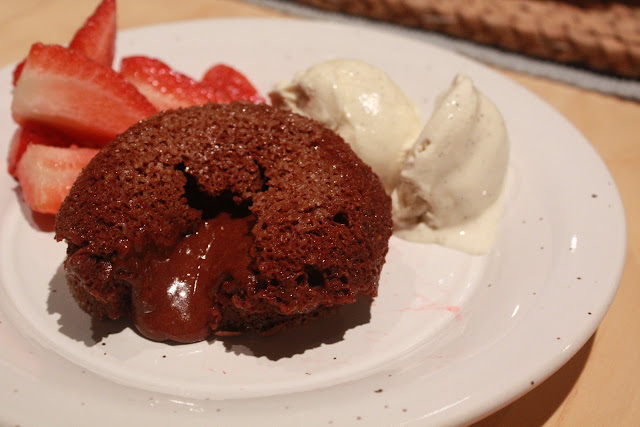 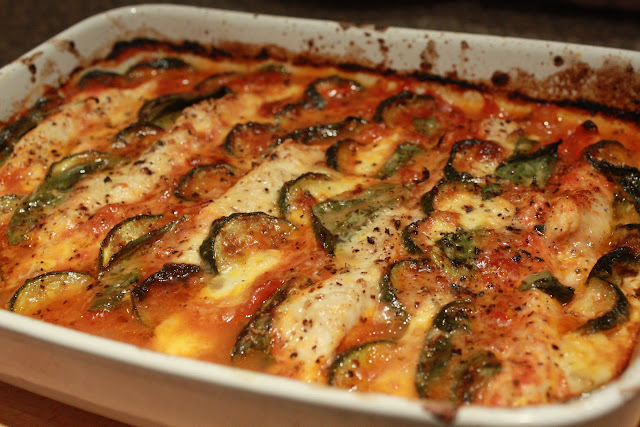 This is one of those recipes that has real a family legacy. Whenever we serve it the story that comes with it is obligatory, so obviously I feel compelled to share it here.
Back in 2000 my dad took a sabbatical off work and as a family we went traveling, the trip culminating in us living in New Zealand for 5 months. My sisters and I went to school there, we rented a house and adopted a full on Kiwi lifestyle for the duration of our stay.
A family favorite was always this bake. It features layers of chicken, mozzarella and grilled vegetables on a bed of homemade tomato sauce.
One time Elle, my older sister, had a friend called Holly around and my parents served this for dinner. Holly enjoyed it so much she asked for the recipe and attempted to make it at home for her parents.
Before I continuing I should point out that there was not much of a foodie culture out there, not in the way us Brits do it anyway.
One of the most prominent issues I recall having was the fact that they didn’t have Heinz tomato ketchup. Instead, they had this monstrosity of a condiment called ‘Whatties tomato sauce’, the local replacement for my beloved Heinz. Its tag line was ‘you’ll always be a Kiwi if you love our Whattie’s sauce’, needless to say, not being a Kiwi, I was not a fan.
But anyway, back to Holly. It transpires she had later attempted to make this dish but instead of making a tomato sauce with chopped onions, garlic and tinned tomatoes etc, she had simply up-ended several bottles of ‘Whattie’s tomato sauce’ into a baking dish and then layered the chicken, veg and mozzarella on top. Not so yummy me thinks.
So, to honor her valiant effort my family named the dish after her.
Here is my (I promise more yummy than Holly’s) version:
2 tblsp olive oil
2 chicken breasts
2 large courgettes
1 block of mozzarella
1 small bunch of basil, leaves picked and stalks finely chopped
1 tin of chopped tomatoes
1 onion, chopped
2 fat cloves of garlic, chopped
½ a chili, chopped
1 tsp dried oregano
large handful freshly grated parmesan
Salt and Pepper
Pre heat your oven to 200 Degrees.
In a pan sweat the onions in half the oil.
When soft throw in the garlic, chili, oregano and basil stalks. Sweat until fragrant then add the chopped tomatoes and half a tin of water.
Season and leave to simmer until it thickens.
While that simmers slice your courgettes, brush with rest of the olive oil and stick under the grill, turn when golden and remove when soft and golden on both sides.
Meanwhile, slice your chicken breasts lengthways into 4 strips and your mozzarella into slices.
When everything is ready assemble the bake; 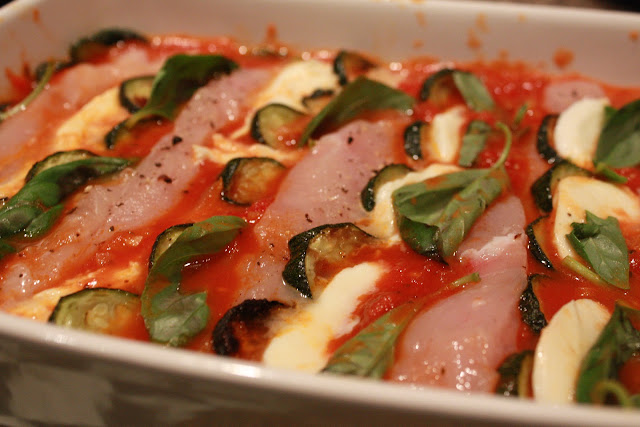 Put the tomato sauce in the base, then in rows layer the courgette, chicken, and mozzarella until the dish is full. Push some basil leaves in between some of the layers and then sprinkle with the parmesan. 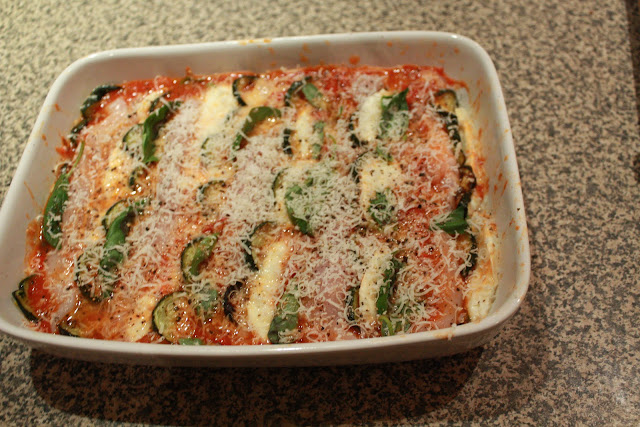 Bake until golden on top and bubbling.
Serve with pasta, crusty bread or whatever you fancy. 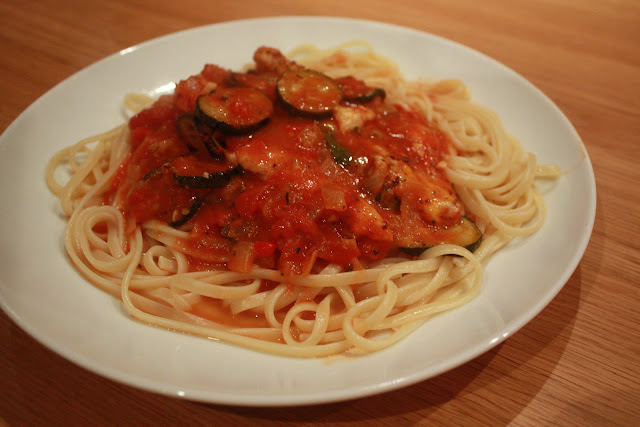 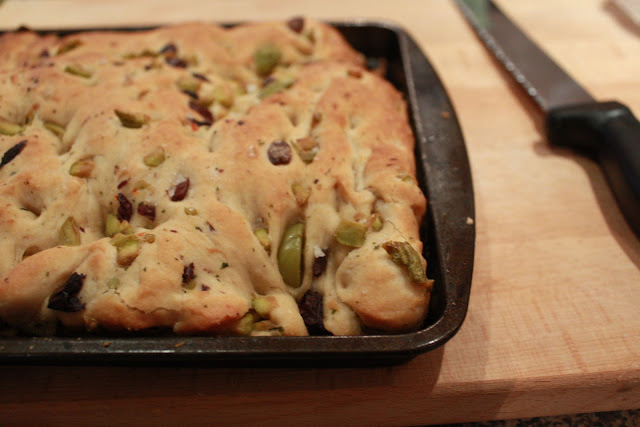 MMMmmm. Carbs. MMMmmm. Carb-y carb-y goodness.
I must say, I could live without meat, I could live without sugar but a life without carbs would not be a good one in my book.
If you hadn’t worked it out I’m definitely not one of those girls who comes out with the constant refrain of ‘oh, sorry, I’m on a carb free diet’ or ‘I’m just trying to not eat carbs at the moment’. Ohhh no.
Don’t get me wrong, those who do it are welcome to. Just means there is more for ME.
NOM.
Aaannyywaayyy…
I loooveee foccacia bread. Love love love love. It’s definitely my favorite type of bread. Throw in some olives and some nice oil and vinegar to dip in and I’m a gonner.
You’ll be likely to find me a few hours later, twice the size and covered in tell-tale crumbs.
So this is officially one of my favorite things. EVER. (I’m quite enthusiastic about it if you hadn’t noticed…)
4 cups Strong bread flour
1 tsp Sea salt
½ tsp Sugar
2/3 cup Tepid water
1/3 cup extra virgin olive oil
1 tsp easy bake yeast
½ cup olives, roughly chopped.
Pre heat the oven to 400 degrees.
Combine the water and yeast and leave to stand until a head forms.
In a large bowl combine the flour, salt and sugar. Add the liquids (it will be sticky).
Knead it until it forms a smooth dough which springs back if you poke it.
Leave in an oiled bowl to rise covered in clingfilm until its doubled in size.
Knock back briefly and mix in the olives then push flat into a well oiled tray (Like this:) 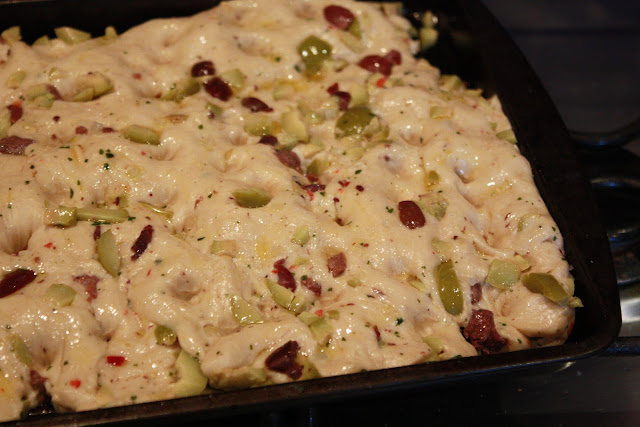 Leave to rise a bit again for around 20 minutes then dimple, sprinkle with some more salt and olive oil.
Bake until it develops a golden crust and sounds hollow when tapped on the base.
Devour (in one sitting if you're me). 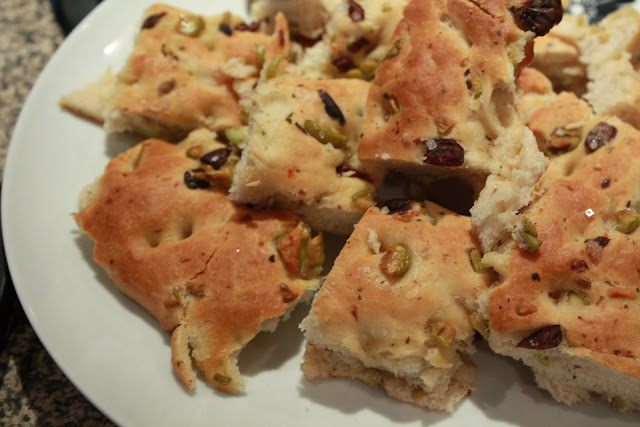 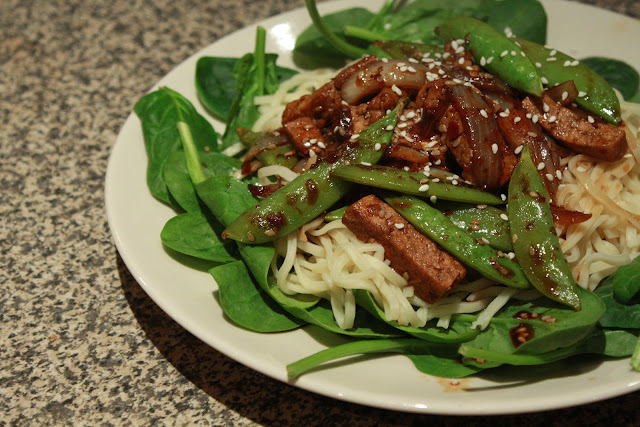 If you live in Brighton, you no doubt will have come across Pompokos and fallen in love at first bite. If you haven’t. Well. I don’t really want to know you if I’m honest. Because then we can’t go together.

For those poorly educated souls reading this who don’t know what/where Pompokos it’s a (very) small Japanese restaurant in Brighton. The food is humble, cheap and fast. No exaggeration here. A main course is less than a fiver and you’ll receive it less than 10 minutes after ordering (I think the fastest I’ve ever received my food is within 3 minutes…as long as they keep doing it I don’t want to know how).

They specialize in huge bowls of sushi rice topped with your choice of meat cooked to your liking, Japanese Katsu curries and various side dishes from gyoza to miso soup and octopus balls (which one of my housemates confirms are actually rather tasty..!) . They also do various yaki-soba-type stir-frys but from a wealth of experience I can confirm that the rice bowls and curries are where it’s at.

My personal tipple when there is either Pumpkin Katsu Curry (bread crumbed and deep fried pumpkin with a Japanese curry sauce) or Tori Chilli Don (Rice topped with fried chicken and onions in a spicy, tangy sauce) with a side of some obligatory chicken gyoza. I can’t lie, whenever my day has the prospect of Pompokos I agonize over the decision between these dishes ALL DAY.

This dish is somewhat of a tribute to Pompokos, and a rather yummy one. As usual I didn’t really have any meat in so opted for a tofu version and made it ridiculously spicy but use your own (probably more sensible) judgment as far as the chili goes and you'll enjoy this. 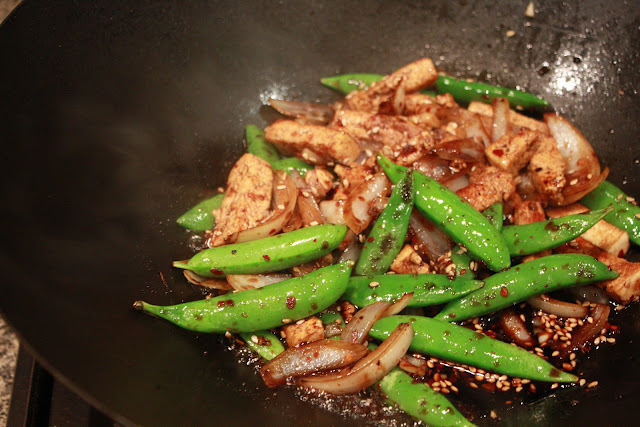 Dust your cubed tofu in the cornstarch and then in a wok heat the sunflower oil.

As that softens, combine the rest of the ingredients in a bowl to create the sauce and when the tofu is crisp and the onion soft but still with some bite pour in the sauce and the sugar snaps and simmer until it reduces and thickens.

When the sauce has reduced and looks sticky-ish taste to check the seasoning and adjust as necessarily.

Serve with rice or noodles garnished with more sesame seeds. 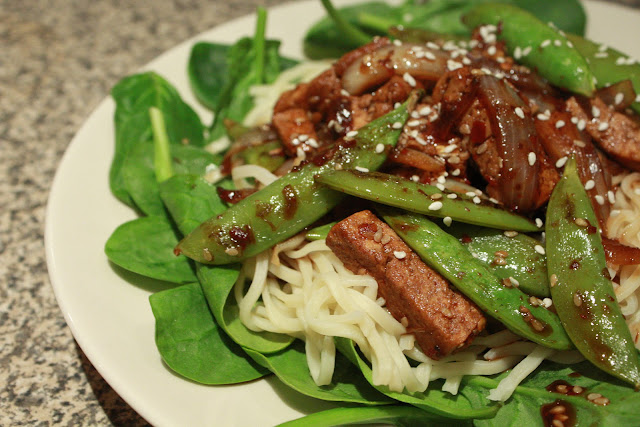