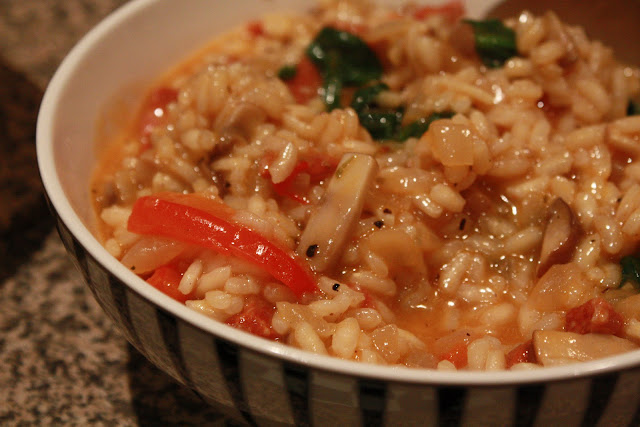 Last night I came home from University and knew one thing. I wanted a glass of wine. I’d had a productive day finalizing what to write my dissertation on and was feeling smug.

When I got home though my dreams of a cooling beverage to celebrate my dissertation-awesomeness were dashed. There wasn’t any wine in the house. Disaster.


However… What’s the best excuse for getting a bottle in? Making risotto. Of course.

So, off to co-op my housemate and I went. A skip, hop and a purchase of white Chilean later, happily with wine in hand I threw this together for the both of us.

I feel like this would be created if a risotto got it on with a paella and had sweet, sweet, rice-y babies.  Here the smoky, heat of the sausage, marries with the hearty, irony spinach and the sweet red pepper beautifully.

As usual this was amalgamated out of what I had in the fridge, which unfortunately was missing some fresh herbs last night. I feel either some fresh thyme, or chives might have gone down a treat stirred in at the end. Nonetheless the final product was de-lish. 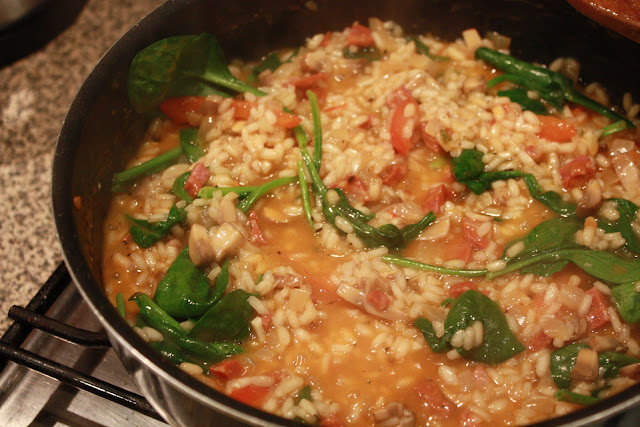 To start with get your stock hot.

Secondly in another pan melt half the butter and then add the olive oil to raise the butters burning point. Over a low heat sweat the onions and as it goes translucent add the peppers, mushrooms and chorizo, when the sausage starts to leak it’s oils, add the garlic, paprika and thyme and sweat until fragrant, season.

Throw in the rice and increase the heat, fry for a minute then add the wine and simmer until the harsh alcohol smell burns off and the rice absorbs the liquid.

Now start to add the stock bit-by-bit adding more after the last has been completely absorbed, stirring frequently, massaging the starch out of the rice.

When the rice is nearly cooked, pour in a last slug of stock and cover. Leave the rice to stand for a couple of minutes with the heat off so it can relax. Stir in the parmesan and serve. 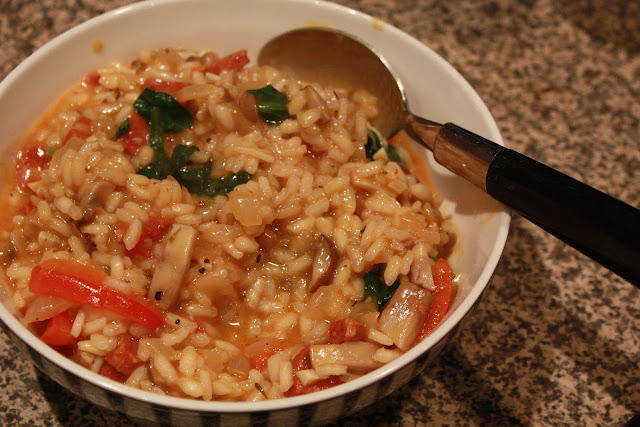 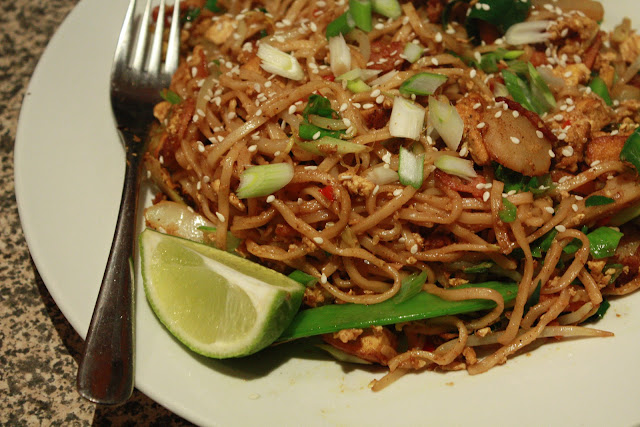 Whenever I have a Chinese takeaway (which isn’t that often I'll have you know...) I’m ALWAYS a sucker for Singapore noodles (I also have an ongoing love affair with shredded crispy beef, but that’s an entirely different matter...)
It’s something to do with the fact that you’re having a Chinese but still getting a hit of curry-like flavors that just does it for me. Of course I’m also getting my obligatory chili hit and we all know about my little chili problem (if you're new to this space by 'problem' i mean full-blown addiction). So. Yeah. All in all I LOVE this dish. 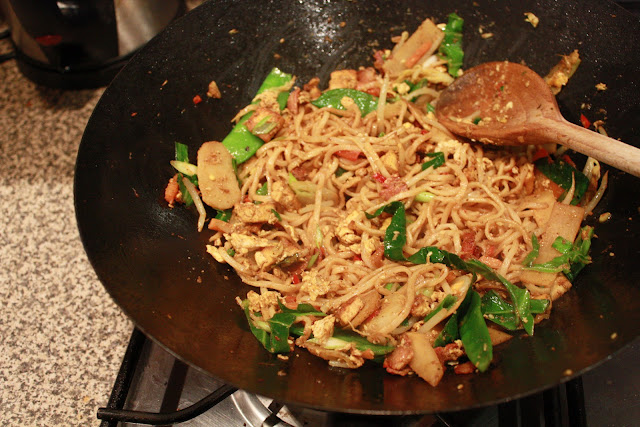 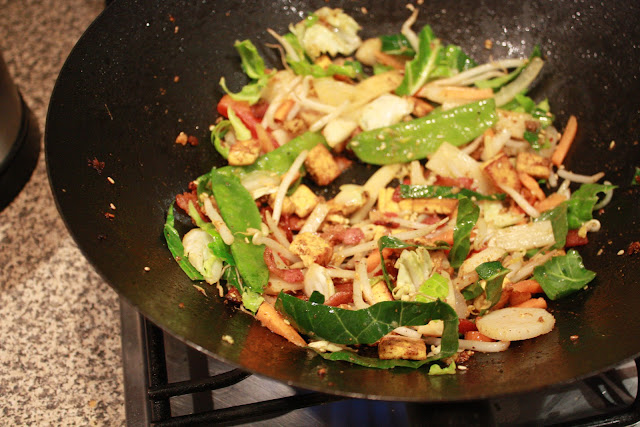 Fry for a couple of minutes then push the contents of your wok to the side and pour the egg into the space created, stir the egg until it scrambles then incorporate into the rest of the ingredients adding the noodles and soy sauce.
Taste to see if it needs any more seasoning and serve with lime to squeeze over and scattered with the chopped spring onions. 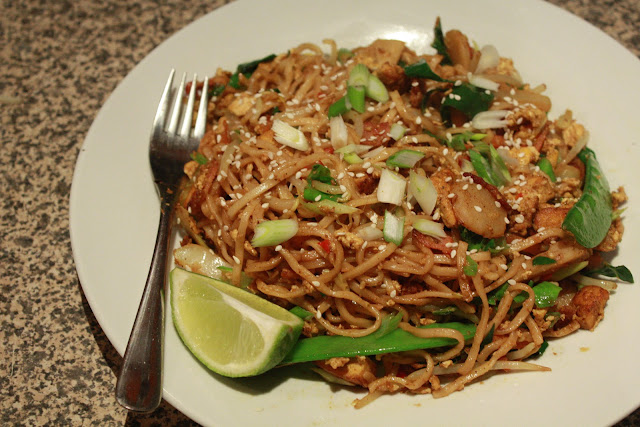 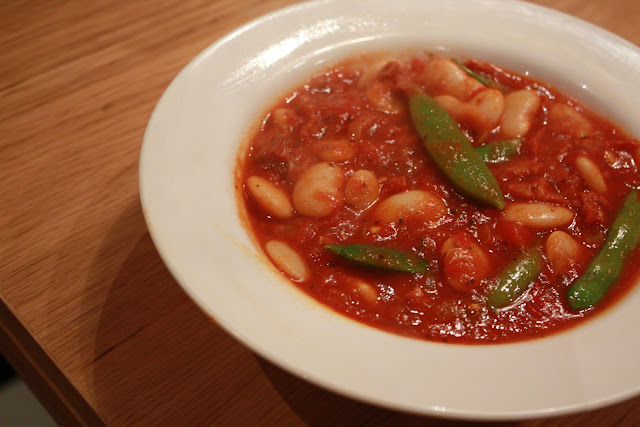 I am a bad blogger.
Various ‘trying to be a grown-up’ stresses  involving the big black hole that is life after university is responsible for this meaning it’s been nearly a month since I last posted.
Don't worry I haven't stopped eating (pffft as if…) but if I'm honest I’ve just been eating on autopilot a lot recently - if I had continually blogged this space would literally just have become a tribute to pasta.
However, I endeavor for this all to change.
I concluded that many of my fail safe eats which I can make with my eyes shut are just that – fail safe and with good reason, because they're YUMMY. So I've decided to blog about them over the next few weeks and here is the first of them.
This is a recipe that I’ve been sitting on for a while, I first made it at the beginning of this academic year and have been honing it since. It hits all the spots of hearty comfort food with yum factor and apart from the chorizo is very economical. If you’re looking to be especially frugal though, reduce the amount of chorizo you put in it. The sausage’s flavor will still permeate the stew - the final result will just be a little less meaty.
I tend to do it as a bit of a make it up as I go along type thing here, so just keep tasting it and adjusting it how you like it - saltier, sweeter, spicier etc. a squeeze of lemon in at the end might be nice too! 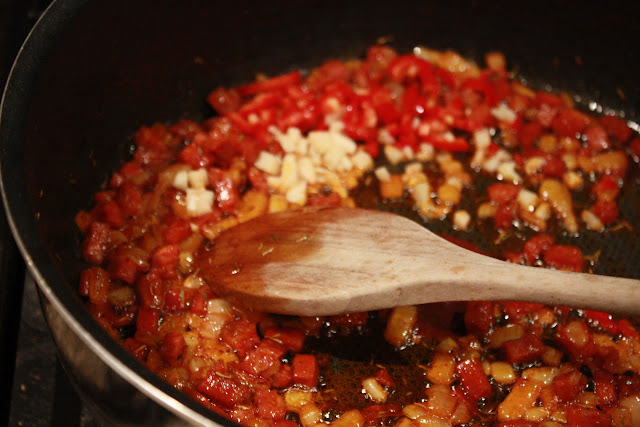 1 white onion, diced.
2 large cloves of garlic, crushed
1 chili, chopped (or more, or less, depending on how hot you like it)
half a ring of chorizo, peeled if necessary and chopped into small-ish chunks
any other veg you fancy (i used chopped yellow peppers but you could use anything that stews well from mushrooms to new potatoes)
1 tsp of dried thyme
1 tsp paprika
1 can butterbeans
1 can chopped tomatoes
500ml chicken stock
1 1/2 tsp sugar
large handful sugar snap peas
salt and freshly ground pepper.
Sweat the onion until translucent, then add chorizo and any other veg.
when the sausage  starts to leak it oils add the chilli, garlic, thyme and paprika, sweat this until fragrant, then add the beans, chopped tomatoes, stock and sugar.
Season liberally and simmer until the water evaporates, the sauce has thickened and everything is tender.
Throw in the sugar snaps in the last 5 minutes of cooking so they remain nice and crunchy, check/adjust seasoning.
Serve with crusty bread. 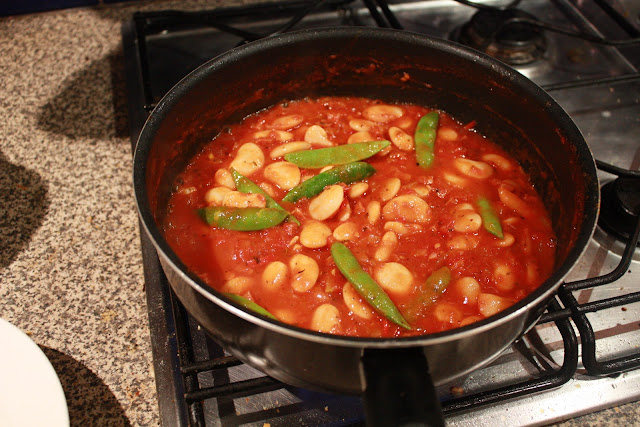 Admittedly not the prettiest, but mega yumm, I promise. 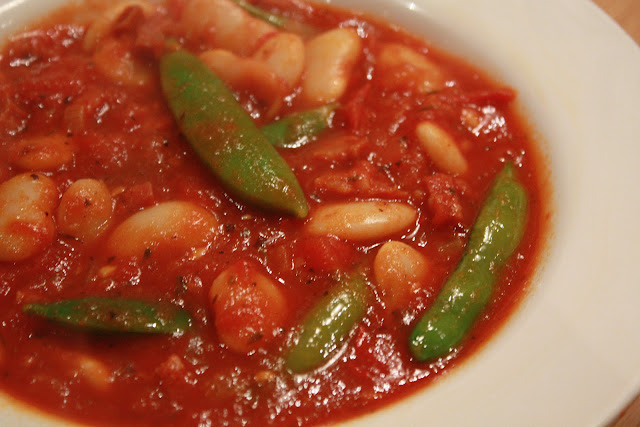